Micro Epsilon tested a thin transparent film in their lab using the Confocal sensor. Above are pictures of the setup. In the second set of photos are the video signal and thickness calculation performed by the Confocal controller. This thickness calculation was 64µm, and was obtained using an estimated refractive index of 1.492. Given a sample of known thickness, we could determine this refractive index more precisely. 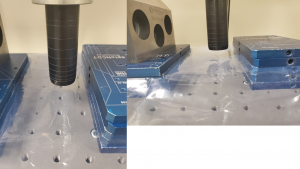 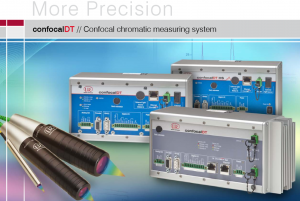 This testing was done with an IFS2405-1, 1mm confocal sensor. On the video signal image, there are two defined peaks, which correspond to the top and bottom surfaces of the material. This is a good signal for the reading. However, the peaks on this signal are getting close together, and if the material were to get much thinner than the sample sent, it would be advisable to go to a smaller range sensor to ensure that the peaks are discernable. However, going to a smaller range sensor would also require more precise positioning of the sample, as both peaks (top and bottom surfaces of the material) would need to be in the 300µm range, as opposed to the 1mm range of the sensor tested. 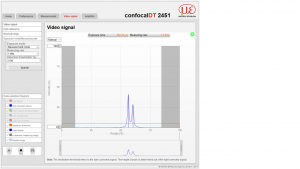 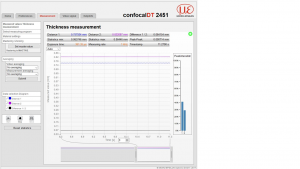